"The Mud-Fighter Producing Trainer from Hell"

Tomoyuki Shinoda (篠田, Shinoda Tomoyuki) is a recurring character in Hajime no Ippo.

He is a longtime trainer at the Kamogawa Boxing Gym.

His surname is Shinoda. In Japan, surnames are listed before given names.

Before becoming a trainer, Shinoda and Fujii Minoru were friends who were amateur boxers partaking in city tournaments. One day after a spar, Shinoda tells Fujii that he is going to turn pro, and looks forward to seeing him in the ring someday. However, Fujii tells him that he thinks he is done as a boxer. Shinoda thought they shared the same dream- To go to the Olympics or become a champ as a pro. Fujii tells him to go and make that dream come true, while he decided to report on boxing instead. The two makes a promise for Shinoda to become a JBC champion, then world champion, as Fujii writes about him as he makes his way up.[1]

Shinoda then became a pro boxer. However, he lost his debut match and eventually retired after six matches and ending with an average record.[2] He later joined the Kamogawa Boxing Gym and became a trainer.

When Kimura Tatsuya and Aoki Masaru joined the Kamogawa gym, Shinoda looked over their training.[3] After eight months, Shinoda told the duo that their pro debut was scheduled. Shinoda then was their second for their pro debut, with both of them winning in the end.

Shinoda was one of Makunouchi Ippo's cornermen for his debut match against Oda Yūsuke.

Shinoda was one of Ippo's cornermen for his match against Jason Ozuma and later, Kobashi Kenta.

Shinoda was one of Ippo's cornermen for his match against Hayami Ryūichi, and later, Mashiba Ryō.

Shinoda was one of Ippo's cornermen for his match against Sendō Takeshi.

Shinoda was Aoki and Kimura's second for their matches in the Class A Tournament after Ippo's win against Saeki Takuma.

Challenge for the Throne Arc

When the Champion Carnival began, Shinoda was one of Takamura's cornermen for his title defence against Tamaki Atsushi. The match resulted in Takamura's win. Ippo was scheduled to face against champion Date Eiji for the Champion Carnival, and when the match began, Shinoda was one of Ippo's cornermen. The match resulted in Ippo's loss.

After the Naniwa gym approved of Ippo fighting their champion, Sendō, Kamogawa later decided to head to the Pension Yoshio as a training camp. When they arrive to the pension, they meet Nekota Ginpachi. Before Shinoda left for the woods to train with Ippo, Kimura, and Aoki, Nekota warned them of bears. Shinoda has the three boxers dash up and down hill until a bear came out and made them run away. That night, Nekota told Shinoda's group that he would prepare something to avoid bears the next day. The following day, Shinoda was shocked when Kimura and Aoki rushed back from roadwork and informed him that Ippo was attacked by a bear. However, Ippo came back with a dog, which Nekota confirmed to be his dog, Hachi. Kamogawa announced to everyone at the training camp that he would be splitting the group for individual training. Shinoda was grouped with Aoki and Kimura, with one training method being doing squats in a river. After Ippo finished his wood chop training, Shinoda participated in Kamogawa's teaching of "punching without punching, the Sakki.

On the final night of the training camp, Takamura returned wounded with a bear claw mark on his chest, claiming to have knocked out a bear. Shinoda then ate a bear nabe that Nekota made for the final night. The next day, Shinoda left with the rest of the group and returned to the Kamogawa Boxing Gym. When Takamura, Aoki, and Kimura had a match against Itō Takaaki, Boy Allade, and Nefuma Ozca respectively, Shinoda was a cornerman for Takamura's match, and the main second for Aoki and Kimura's match where all three boxer's won. Shinoda was impressed with Aoki and Kimura's results of the mountain training.

On the day of Ippo's title match against Sendō, Shinoda was one of the cornermen where Ippo won and became the JBC featherweight champion.

On the day of Kimura's title match against the JBC junior lightweight champion, Mashiba, Shinoda was told by Kimura to not let anyone in his room for five minutes to be alone. After the five minutes and everyone entered the waiting room, Kimura told Shinoda and everyone in his waiting room that he would retire if he loses the match. Shinoda then encouraged Kimura to use his five years of experience to show the champion what for, wanting to let Kimura's decision on retirement be his alone. When Kimura's title maths began, Shinoda was one of his cornermen. After the eighth round, Kimura claimed to have seen the belt, which Shinoda remarked that hearing that could give someone goosebumps. In round nine when Kimura had a dangerous fall, Shinoda prepared to throw the towel into the ring to stop the match until Aoki stopped him. Despite Aoki's rebuttal, Shinoda decided to protect his boxer as a cornerman until Kimura got back up, with Shinoda deciding to not throw it. The match shortly stopped when the referee noticed Kimura was unconscious when Kimura slowly moved his hand to counter Mashiba, preventing Kimura from getting badly injured. With Kimura losing the match, Shinoda went into the ring to check on him. Shinoda then told a confused Kimura who still believed he was fighting, that it is over.

When Ippo's first JBC featherweight title defence match in the Champion Carnival against Sanada Kazuki began, Shinoda was one of Ippo's cornermen for the match which resulted in Ippo's victory.

Shinoda was one of Aoki's cornermen for his match against Paddy Magramo and one of Ippo's cornerman for his second JBC featherweight title defence match against Yamada Naomichi. The matches resulted in Aoki and Ippo's victory.

While Itagaki is preparing for his upcoming match against Hoshi Hiroyuki, Shinoda ask how Itagaki is doing, and comments about both of them working hard and leaving behind no regrets. He tells Aoki and Kimura to cheer hard, otherwise they will be drowned out by Osaka Fan's. Aoki and Kimura mentioned they don't need to worry, since they got "A Trainer From Hell" looking after him.

Prior to the Itagaki vs Hoshi match, Yagi tells everyone that Shinoda turned in his resignation letter. Shinoda tells Kamogawa that it he is afraid it might be exactly like Aoki and Kimura say, where he is a a trainer from hell who only teaches how to fight in sludge matches.

Yagi tells him not to take it seriously, but Shinoda believes he failed at both Kimura and Aoki's title matches. He wasn't able to tap into enough of their potential then. If Itagaki were to lose on top of that, then it would be his fault for not helping him utilize his talent as well. Shinoda tells Kamogawa if Itagaki loses his next match, then he will take responsibility for it.

Itagaki starting to feel the pressure prior to the match. Kamogawa tells Itagaki to get it together, do his best and have no regrets. If he losses the fight half halfheartedly, he needs to think about what will happen to Shinoda. Shinoda stops Kamogawa from mentioning the Registration Letter since he doesn't want to add more pressure to Itagaki.

At the start of the match, Shinoda tells Itagaki to focus and watch all of his moves.  Itagaki keeps on repeating focus in his head.  When the bell rings, time seems to slow down for Itagaki.  When Hoshi throws his first punch, Itagaki throws a sharp uppercut instead causing Hosi to get Knocked down.  Itagaki is starting to tap into his potential.

Most notably, his bond with Itagaki is brought to light in the Class A tournament in which he brought out "Itagaki's true potential" against Karasawa Takuzou. Later he was acknowledged by coach Kamogawa as being a good partner for Itagaki after getting Itagaki to calm down by playing Shiritori with him when fighting Saeki Takuma.

When Shinoda enters the Kamogawa Boxing Gym, he notices Fujii's also there. After Fujii explains their story to everyone at the gym, Shinoda tells them that he lost his pro debut match, and only fought in six matches, ending with an average record. Shinoda apologises to Fujii about not being able to fulfil their promise, but Fujii tells him it is okay, since he just wasn't suited to be a pro.

Shinoda visits Ippo in hopes to get him to return to boxing. However, not as a boxer but as a trainer. Kumi yells at him for trying to get Ippo back into boxing, which makes Shinoda scared of her.

Shinoda explains that he gets nervous when he is yelled at by a woman. Shinoda tells everyone that he once paid a visit to a "Free information office" (a service that points people to lewd businesses for free like Cabaret clubs, Soaplands/brothels, to even prostitution.) When he picked his destination, he turned around, only to find his wife standing there. It wasn't the first time it has happened, so he got into a lot of trouble for it. It got so bad to where his hair started to fall out. Ever since then, he always get nervous around angry women. Ippo's mom thinks Shinoda is hen-pecked, and he agrees.

When Ippo starts to ask what a "Free information office" is, Shinoda starts to lose hair again, and decides to leave. While leaving, Shinoda tells Ippo that they are short handed since Kamogawa is in hospital with a cold. Ippo is relieved when he hears that. Shinoda mention that Yagi and him talked, and the plan was that the coach only focus on Takamura for now, and to get someone we trust to help out in the meantime. Ippo tells Shinoda that he needs some time to think about it, but he will have answer for him soon. Shinoda notes that before Kimura's match next week would be ideal. Shinoda leaves.

Shinoda is a man with a tanned, average body structure. He has short dark brown hair and long eyebrows and one forehead wrinkle. His eyes appear to be closed. Early in the series, he has no moustache, but later on he grows a short moustache. Later in series, his hair slowly begins to fall out, starting from the top of his head. He wears a hat to cover the bald spot.

When Shinoda was a boxer, during his amateur days, with his boxing skills, he was able to make it to a city tournament finals and win.[4] While pro, his boxing skills were shown to be average, losing most of his six matches before retiring.

Fujii and Shinoda promising each other 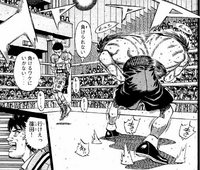 Shinoda's debut as a pro 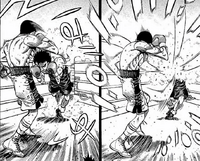 Shinoda's debut
Add a photo to this gallery

Retrieved from "https://ippo.fandom.com/wiki/Shinoda_Tomoyuki?oldid=71993"
Community content is available under CC-BY-SA unless otherwise noted.