Switch Hitting (スイッチ) is the ability to fight in both orthodox and Southpaw "unorthodox" styles and/or switch between the two fluidly. This presents numerous challenges to counter punchers like Miyata Ichirō and other out boxers, most notably a disruption of their rhythm. As of (volume 99) Randy Boy Junior and his father are the only characters in the series regarded as switch hitters.

This technique relies on the pivot foot to rotate the body in order for the style switch to be fast. Miyata stated that going against this style felt like fighting a new boxer with a completely different range and timing, each time due to the switching. It effectively seals up any chance to counter as the unpredictability interferes with a counter puncher's sense of timing. The reason why the words "right" and "left" are used so often in boxing is that the left is supposed to have more speed and the right is supposed to have more power, and vice versa for Southpaws. And if you can break that rule freely there'll be almost no bad habits, no element of surprise or weaknesses. The tremendous pressure given off by this technique and the constant switching is what earned Randy Boy Junior the nickname "Asura" as he appears to others like 3 boxers in one, mimicking the multi-limbed deity in his form. While not touched on in the manga or anime, since this style relies on pivoting, it would be less effective if the user's legs were damaged or compromised. Also, while not really a weakness, it has been stated that if a boxer decided to fight at close range (like Ippo), then the advantages of switch-hitting would disappear. 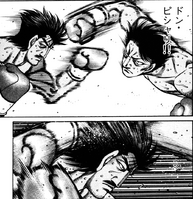 The lure to counter punchers using a southpaw stance

Devastating impact from a right straight
Add a photo to this gallery
Retrieved from "https://ippo.fandom.com/wiki/Switch_Hitting?oldid=68805"
Community content is available under CC-BY-SA unless otherwise noted.