He was a featherweight professional boxer and former first seed during Date Eiji's reign as the JBC Champion. He is the seventh individual to challenge Makunouchi Ippo for the Japanese featherweight title. Take is the most experienced boxer that Ippo had fought up to this point, as well as the first southpaw he ever fought in the pro ring and was someone that Date Eiji held in high regard.

His surname is Take. In Japan, surnames are listed before given names.

Take Keiichi was the former first seed when Date Eiji reigned as champion. His son soon came down with an illness however, and that made Take immediately to retire from boxing and take care of his family. As his son overcame his illness, he was told by others around the area they were living that his dad was afraid to fight the champion, that he ran away they were saying. Take's son goes to him crying and says that he is disappointed that his father didn't fight the strong champion. After what his own son said, that to him, his son basically said that he was afraid to face the champion, he immediately goes and resumes boxing in order to prove to his son that he is not a coward.

Take as he went back to the ring, he made his way up to the title once again, this time against Makunouchi Ippo, the current JBC Featherweight Champion that he was defending the title for the 7th time. Before the weigh-in, his son says that after he wins this fight they will go to the amusement park together. The next day, during the weigh-in, Keiichi goes in pretending he is sick, this was his trick to see what exactly is the champion he will be facing. Ippo was so sad that he saw Keiichi's condition like that so he said if doesn't feel well he can postpone the fight for another time when Keiichi gets better. Humbly refusing Ippo's proposal of rescheduling their match, he makes weight and leaves with a surprise on his face after seeing the champion being so good of a person.

As the match starts, he gets a huge knockdown by the champion, yet he is back up, the crowd does not have high hopes of him right from the beginning. After the first and second round which Keiichi starts to understand that Ippo has no idea that he is a southpaw, he then uses Ippo's inexperience against southpaws to his advantage through out the fight, and fights in close so as to take away the power of Ippo's immense lower-body strength and rotations on his punches, and Ippo has alot of trouble on dealing with it and gets a cut above his eye. Ippo turns the fight around by taking an even lower stance and using Take's game plan against him. Take knows that by opening the cut again, the referee will stop the fight but he doesn't and pushes forward aggressively to prove that he will not run away again, he wants to prove to his son that he can fight against a strong champion toe-to-toe, as a proud boxer.

His son understands as he cries that it was all his fault for him to be in such a condition, the mother tells him to stand and watch his father until the end. He gets hit alot and goes unconscious, then Ippo tries to make the Dempsey roll which will be very dangerous and he might die but, completely gets shutdown before it starts, by Keiichi stepping in. Ippo manages to throw a powerful right that makes Keiichi go unconscious, but that doesn't stop him as he continues for a little more, until another one comes from Ippo, knocking him down brutally. The match ends in Take losing in the slugfest. Ippo, who successfully defended his title for the 7th time, says that he was a strong boxer with a strong will, as his coach Kamogawa said, he was a boxer, a man, and a father.

After his match with Makunouchi Ippo, Keiichi's son Hide-Bou tells his father that he wants to become a boxer and for his father to be his boxing coach after seeing how great he fought and refuses to go to the amusement park. Happily Keiichi hugs his son and his mother behind shed tears.

Take is portrayed as a relatively slim, mildly muscular man of average height with short, shaggy dark colored hair. A small amount of wrinkles outline his dark colored eyes, both of which are constantly seen half-lidded. The lower part of his face is covered in stubble, accompanied by a thick mustache.

Take's first appearance in the series was during a weigh-in, during which he became sick and could barely walk over to the scale. He is initially seen as polite, respectful and considerate, keeping Ippo at bay so the other wouldn't catch his flu. In the ring he is depicted as brave, incredibly spirited, but also relaxed to a certain extent. He seems to care a lot about his family and his son, taking a leave from boxing when the latter came down with a terrible illness.

Take is strong at taking punches, knows many tricks and can use both the Orthodox and Southpaw stances. He is shown to be an unorthodox in fighter. He knows how to stall a fight on the inside when he is injuried, and he also will make plans and strategy for how to fight his opponents. His strong body and intense fighting spirit allowed him to stay in the ring for a prolonged time with esteemed hard puncher Makunouchi Ippo.

Even with all these plans, tricks, the opponent might find annoying and might lose, there are still flaws. His weakness is that he uses the same thing again and again, and if the opponent realizes it, it is all over like what happened with his title match against Ippo. 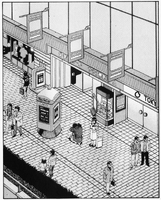 After the match happy with his family.
Add a photo to this gallery 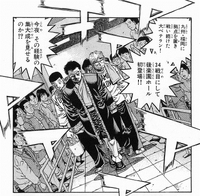 Keiichi gets a heavy right hook from Ippo, scores down, but gets back up again.

Anti-Infighter Clinch, both hands of the opponent raised up, and cannot move. 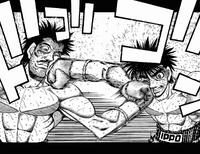 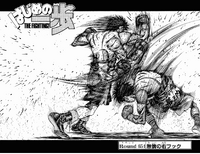 Keiichi misses to hit Ippo with a powerful uppercut.

Keiichi steps in and stops the Dempsey Roll before it takes motion.
Add a photo to this gallery