She is the grandmother of Sendō Takeshi. She raised Takeshi after his father died, until now. She runs a dagashiya (an old-fashioned Japanese snack shop).

The Naniwa Tiger Side Story

She attended her grandson's title defence against Shigeta Akira. There, she met Makunouchi Ippo and Kamogawa Genji. She learned that Ippo and Kamogawa are the enemy, rather than the fans she believed they were. As the match is about to start, she needed to use the restroom, which she had Ippo to carry her there. She then requested for him to wait for her as she did not remember where her seat was. When the two got back to the seats, Sendō appeared to be beaten one-sidedly as she began to fall asleep.

When Sendō appeared frustrated towards his opponent, she expressed her distaste as she believed that Sendō should forget the shame and embarrassment when he is out there and just answer to the fans' calls.

At the Sendō Shop, she was visited by writer Iimura Mari, who came to interview Sendō. She told Mari that Sendō was out running, requesting the writer to wait until he got back. She was then interviewed by Mari, confirming Mari's claim that Sendō lost his parents and she raised him by herself. When Mari asked her how she raised Sendō by herself, she told Mari about Sendō's past where he became a delinquent. Sendō arrived, which made her yell at her grandson about keeping the reporter waiting.

When Sendō returned home after losing to Ippo, Sendō mentioned to that he is still weak. After hearing that, she looked toward a picture of his parents and believed that their boy just came home a bit stronger.

During Takamura Mamoru travels across Japan, he stopped at Sendō Takeshi's Family Dagashiya in Osaka. Sendō asked her what happened to the pickled squid that was here. Granny mentioned the stuff's been there since she got married, but today she said it was a delicacy and sold them. She mentions that some big guy came to buy them, and she believed he was definitely get diarrhea from it (and started laughing.) Sendō wondered how she can laugh at it, and thought it fraud. But she told him that she was willing to sell whatever can be sold since she was a Nawiwa Shopkeeker. Sendō commented that the one who bought it was an idiot and let the matter drop. She mentioned to Sendō instead of chatting, to go out and run since he doesn't know when his chance will come.

Sendō Takeshi told Hoshi and her that he was going on a beat down tour and challenging the toughest guys in the nearby weightclass on his beat down list. He was planning to challenge for the world title soon, where he believed some guy would look down on Sendō thinking him weaker than them. In order to help them to understand, Sendō decided to just defeat them all so no one can complain about it. As he left, Takeshi's Grandmother thought he was a moron, while Hoshi believed him to be a real man where he vowed to take care of things while he was gone in order for him to beat people until Sendō was satisfied.

As Takeshi's Grandmother was about to close the store, she mentioned to Tora that no one seemed to visit the store since the local kids are too busy with video games and homework. Right as she was about to go inside, Takeshi's Teacher shown up and greet her. Sendō's grandma remembered the teacher visiting there in the past, and she believed that the teacher was there because she finally decided to be Sendō's wife. The teacher mentioned she moved nearby after she found a job a cram school, and she was just stopping to say hello, but Sendō's Grandma wasn't listen and continued to talk. She mentioned that should could now die without any worries, since she was afraid something would happen to Sendō after she was gone, but now she felt it would be find if she could die. As she was about to go on, Sendō arrived and hit her in order to stop talking. Sendō yelled at her to listen what the teacher was saying. Sendō added that he came start from the gym after he got her message while his grandma was yelling at him for what he did in front of his wife.

Sendō told her that the teacher wasn't his wife, which made his grandma wonder why she was there. Sendō asked the teacher to look after her, but his grandma felt she didn't need someone to look after since she was in great shape. Sendō took her a bit away, and he asked if she wanted him to end up with her one day, where he couldn't come out and say that to her. Instead, he asked the teacher to look after her to make it seem like that was the real reason. After hearing that, Sendō's grandma fell over backwards like she fainted. The teacher told her to stop since it wasn't that funny, but added that she planned to check on her every day. Sendō thanked her, since he was getting ready to go to Mexico. As Sendō's grandmother and teacher was about to head inside the store for, a group of people headed toward the store. The teacher thought Sendō was going to get into a fight, and tried to stop him when the group of people got into a guarding position around the store when Sendō gives the signal.

Hoshi, who led the people to help guard the store while Sendō left for Mexico, explained that while they appeared to be thugs, they each had a cat symbol made by Sendō to prove that they are an ally. While Sendō's grandmother detested the idea due to their appearance would scare the customers away, but Hoshi pointed out that don't know who would approach two women all alone. Sendō's grandma yelled that it would be customers that approach. The teacher believed that she should go back to Tokyo now that she was not needed due to the group. Not wanting his teacher to leave, Sendō quickly dispersed the group. As Sendō began to leave for Mexico, his grandma criticed what he was wearing since it was Mexico not some holiday weekend, but Sendō believed it would all work out. His teacher as worried about how he will communicate with the Mexicans. Hoshi then claims that he will go with him as he knows English, which impressed Sendō. As they were leaving, Sendō mentioned they were going to catch an overnight plane, where it should only take them 4 or 5 hours to get there. After she heard that, his grandma was impressed since that would mean it was closer than a bus trip from Osaka to Tokyo, but his teacher told it wasn't. As they left, Sendō's grandma wondered if those two idiots can make it, and asked the teacher's thoughts on it.

She is rather old and short, with white/grey hair. She tends to have her eyes closed, like she is sleeping. She uses a cane. She sometimes seen with her pet cat, Tora.

She cares a lot about Sendo, but can be rather strict with him. She doesn't like him getting into fights, but she is okay with it if it is for the right reasons. 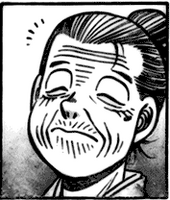 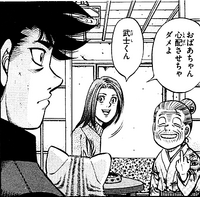 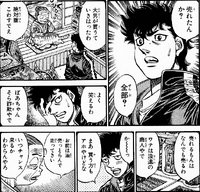 Sendo's grandma mad at Sendo
Add a photo to this gallery 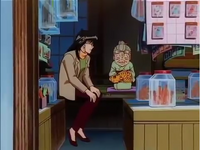 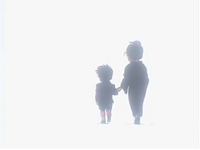 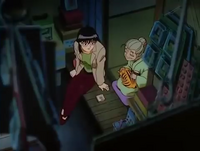 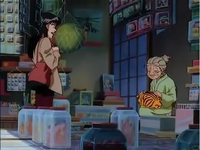 Add a photo to this gallery
Retrieved from "https://ippo.fandom.com/wiki/Takeshi%27s_Grandmother?oldid=70810"
Community content is available under CC-BY-SA unless otherwise noted.