Yuko Kobayashi
Tomoko Yamaguchi (山口 智子, Yamaguchi Tomoko), often referred to as Dr. Yamaguchi, is an orthopaedic surgeon who runs a bone clinic. She was a well-known Judo practitioner said to be the best of her class in Japan. She primarily acts as Makunouchi Ippo's physical therapist.

After being recommended by to see Yamaguchi, Makunouchi Ippo went to see her. Yamaguchi told him that she heard his situation and began to give him a checkup. She informed him that the reason for his injuries is the fact that the muscles of his arms can not withstand the punching power he has. She then told him that he will be able to fight in the next match but also warned him about the dangers of it. In order to able to punch full power without getting injured, she revealed that Ippo must develop his shoulder muscles.

Later on, Yamaguchi visited Ippo while he was training with Kamogawa Genji and Takamura Mamoru. As they trained, she noted that the training also improved back and shoulder muscles, which was the best thing for Ippo. Both the doctor and Kamogawa agreed that unless Ippo was one hundred percent, he would not be able to fight. Yamaguchi mentioned that she can give Ippo a pain killer to help kill the pain in his fist for his match.

In Osaka, Yamaguchi met Ippo prior to his weigh-in. After greeting Yamaguchi, Ippo went to the weigh-in as the finals for the All Japan Rookie King Tournament began. In the locker room, Yamaguchi examined Ippo's fist and determined that due to his pain, the only solution is to give him a shot. She also warned him that by feeling no pain, he would not be able to know if he gets a worse injury. After taking the pain killers, Ippo could now punch, even though he did not feel anything. Yamaguchi watched Ippo fight and defeat Sendō Takeshi in the match. After the match, Yamaguchi went out celebrating with them to celebrate Ippo's win. Takamura and Kamogawa ended up getting into a fight over her.

After a month had passed, Ippo got his right fist checked by Yamaguchi, who informed him that it was completely healed.

In order to defeat Alexander Volg Zangief, Kamogawa had Ippo go through a harsh training menu that was taking its toll on him. Yamaguchi visited Ippo's home to give him a massage as requested by Kamogawa. When She heard about Ippo's training menu on top of his normal practice, she realised that his stamina could last for eight rounds. By feeling his muscles, she learned that he built up muscles that could store more oxygen than before. She also noted Ippo's defensive power went up, as the springs in his legs have the ability to force things up but also absorb damage. She was impressed with Kamogawa's menu since every exercise that he had Ippo doing was for a specific result.

When Ippo visited Yamaguchi for a check up before his title match against Sendō, She warned Ippo that while there was nothing wrong with his fists, Ippo is more prone to hurt them again. As she was about to give Ippo a massage, she noticed Ippo's back muscles are bigger. Yamaguchi noted that while chopping wood would increase power, the greater the power, the more prone he is to injure his fists. To prevent this, Yamaguchi gave Ippo a shock absorption rubber to put it under his bandages.

When Ippo was doing intense training to improve the Dempsey Roll before his match against Shimabukuro Iwao, Yamaguchi gave Ippo massages.

While Ippo was training for his match against Sawamura Ryūhei, Yamaguchi received a call from Kamogawa to go to the gym. When she got there she was asked to perform an emergency checkup on Ippo by Kamogawa. After being surprised about Ippo's increased muscles, she noted that there were too much strain put on his waist and knees, noticing an accumulation of inflammation due to a heavy amount of stop and go motion as well as an odd twisting motion. She warned that putting more stress there is dangerous since injuring one's waist and knee muscles can end an athlete's career. She advised him if he wanted to use the Dempsey Roll, to use it only two times, otherwise his life as an athlete is over.

When Ippo's match against Sawamura arrived, Yamaguchi watched as Ippo wins the match. After the match, Takamura carried Ippo to the waiting room after he collapsed in the ring, where she was waiting. As she checked Ippo's conditions, she mentioned that the New Dempsey Roll should have hurt him, and if there is any serious damage it will effect his career. After the checkup, she revealed that there are tearing of the muscles fibres, some blood vessels burst, and his ligaments were slightly hyper extended, believing that his tough muscles saved him. She assured that there were no career ending injuries, relieving everyone in the room. After Ippo went home with Mashiba Kumi, Kamogawa asked her what she thought about Ippo's condition. She answered that his body is hurt quite a bit, and If Ippo used the new Dempsey Roll anymore in the match, he might have gained permanent damage. She added that Ippo must rest, but after recovery, Ippo would throw that punch again, which will continue to hurt his body. However, Yamaguchi believed if Ippo strengthened and reinforced his middle or lower body, he may be able to use it without any pain.

Yamaguchi was visited by Ippo after his match with Sawamura. Yamaguchi, worried about Ippo's left knee, gave Ippo a crutch and advised him to not do any practise or exercise. Yamaguchi ordered him to not rely on the Dempsey Roll as it causes great stress on his body and will shorten his life as an athlete and cause him an early retirement upon continued use. She suggested to limit the use of the Dempsey Roll if Ippo has things he wants to still accomplish, adding that he should have the power to win even without the Dempsey Roll.

At the Yamaguchi Chiropractic, Yamaguchi was visited by Takamura, who recently unified the WBC and WBA middleweight titles. She massaged and examined Takamura's right leg and discovered that his heel and the back of his calf were in bad shape. When she tried to examine Takamura's adductors and had him face up, Takamura tried to flirt with her. However, when Yamaguchi mentioned how Ippo comes to her clinic a lot, he got angry for trying to compare Ippo with him and tried to jump on her, which resulted in Yamaguchi throwing him out the window. Later, Yamaguchi saw Takamura doing his victory parade around the area where he was acting out as no one attended. Later, when Takamura visited Yamaguchi, he lied about the crowd size of his parade. After Yamaguchi finished examining and massaging his right leg, he tried to jump on her again, leading Yamaguchi to throw him out again.

At the Yamaguchi Chiropractic, Yamaguchi was visited by Ippo, as he wanted her opinion on him using ankle and wrist weight straps. She first advised Ippo against using them to strengthen the new Dempsey Roll, but tells him to take things slowly in order to prevent any potential strain on his body. Later, she went to the Funa Bowl to check on Ippo for Kamogawa. She noticed Ippo is bowling with Takamura, Aoki Masaru, Kimura Tatsuya, and Itagaki Nanako. Takamura thought she is there to see him, and he told his gym mates how they started a relationship after a promise. She added that they ended up promising under one condition, Takamura has to kneel for her, which he refuses to do. While watching Ippo bowl, she was surprised that he got a strike, as it takes a lot of strength and rock solid stability to do that with one leg in the air, especially with weights. She believed Ippo has levelled up his natural born strength and balancing from working on the fishing boat, similar to a fusion of power and flexibility. She informed Ippo that Kamogawa asked her to check on him, and that he is waiting for his return at the end of summer. Later, she was visited by Takamura. However, the visit ended in Takamura being thrown out while naked, and her calling the police.

When Takamura went to the Yamaguchi Chiropractic, Yamaguchi threw him out the window after being asked to have sexual intercourse with him to give him motivation for his upcoming match against Keith Dragon, telling him that he is at the wrong place. After Takamura's weigh-in, Yamaguchi was visited by him, which ended in her throwing him out once again. After watching Takamura defeat Dragon and becoming the WBC super middleweight champion, Yamaguchi called Kamogawa for Takamura's address in order tend to his injuries. When Takamura arrived and was carried to inside his home by Ippo, Yamaguchi noticed how Ippo is still wearing his wrist and ankle weight straps, wondering how much stored power he would have if he went back into the ring, predicting that he would be able to use the Dempsey Roll with no problems. As Takamura slept on a futon, Yamaguchi wrapped up his injured leg and replaced the bandage on his forehead before leaving.

Yamaguchi is known by most of the characters to be extremely physically attractive. She has a voluptuous figure and large breasts. Takamura usually tries to sneak peeks at her body. This happened once at Ippo's celebration dinner for his winning the All Rookie Tournament, where Takamura tried to look at Yamaguchi's thong through her panty line when she was drunk and bending over.

Yamaguchi tends to treat boxers and their injuries with as much respect as can be expected from a seasoned professional. She maintains her composure in the face of smitten boxers trying to either court or grope her, by dismissing their advances off as humor, calling their bluffs, or responding with direct violence in retaliation. 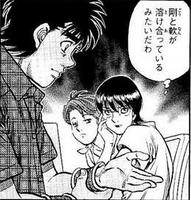 Yamaguchi's warning on the Dempsey Roll Stop and Go motion

Ippo mentioning getting Massage prior to Shimabukuro 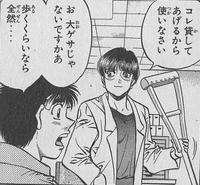 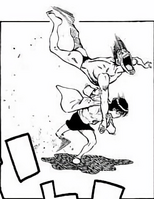 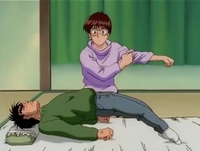