He is Makunouchi Ippo's pet dog and the son of Hachi. He lives with Ippo and helps with Makunouchi Fishing Boat. He sometimes follows Ippo during his training, road work, or to Kamogawa Boxing Gym.

Wanpo is the son of Nekota Ginpachi's dog, Hachi. He was one of the five in the litter, where he has four other siblings that live with Nekota.

After Makunouchi Ippo defeated Sendō Takeshi and gained the JBC featherweight belt, a victory celebration part was held at the Sugar Ray on his birthday. During the party, Nekota Ginpachi gifted Ippo one of Hachi's puppies. The puppy proceeded to defecate on Ippo's championship belt. The event caused the puppy's new owner being nicknamed Poop Champion (ウンコ チャンピオン, Unko Chanpion) by Takamura Mamoru.

When Ippo went to do roadwork, the puppy followed him, however, he could not keep up with Ippo's speed and gets worn out. The puppy then followed Ippo when he went to see Mashiba Kumi. When Kumi hugged the puppy, Ippo grabbed the puppy out of her arms when he made a face that he makes when he is about the defecate. After Kimura Tatsuya retired due to losing his title match, Ippo visited Kamogawa Boxing Gym with his puppy. When they ask Ippo if he decided on the puppy's name yet, Ippo mentioned that Makunouchi Hiroko named him "Wanpo" written in Katakana as a play on Ippo's name. (Where 'Ippo' means 'First Step', 'Wan' is how the Japanese say the English word 'One'.) When Kimura came back to the gym, Wanpo started barking at him, causing Kimura to get an idea after overhearing the earlier conversation. Thanks to Wanpo, Kimura decided to come back by changing his given name to Katakana on the gym's entry list.

Prior to the match, Wanpo began following Ippo on his training and roadwork. Wanpo also followed Ippo to the Kahuna Pasta House when he went on his date with Kumi. Wanpo helped relieved tension between the two, however, the date turned sour toward the end. Later, after Ippo won against Sanada Kazuki, Ippo fished two days later with Wanpo at his side. He then barked when he noticed Kumi approaching.

Wanpo ran to Ippo one night while he was talking to Īmura Mari about Yamada Naomichi, putting his paw on his owner to comfort him after learning about Yamada.

When Takamura, Kimura, and Itagaki Manabu were going to the beach for training camp, Takamura forcefully took Wanpo in Ippo's place since Ippo was told to have three weeks off after fighting Yamada, and he wanted to put Wanpo in weight management. Ippo was soon brought to the same beach by coincidence when he was invited by Aoki Masaru, Tomiko, and Kumi. Later, Wanpo spotted Ippo with Kumi, Tomiko, and Aoki, and even ran into his father, Hachi, along with Nekota. That night, Wanpo followed Takamura, Kimura, and Itagaki on the beach where they partook in voyeurism. When Takamura was then caught groping Tomiko when fireworks bloomed, Wanpo ran away with Takamura. When Takamura ended up in the ocean, drowning, Wanpo went to find help. When he returned with Itagaki and Kimura, they found Nekota and Hachi passed out and Takamura panicking in the ocean. The next night on the beach, Wanpo went with everyone but Takamura to the beach to enjoy the fireworks while Takamura planned his revenge against them for having fun without him, by aiming fireworks at the group. When Takamura was spotted, he was talked into having fun with them after everyone cheered for him to join them. After a while, the fireworks began to go off, making Wanpo and everyone else run away from them.

Wanpo left the Makunouchi Fishing Boat to see Ippo during a snowy night and barked when Miyata Ichirō approached them. Ippo had a heated conversation with Miyata, which ended with Ippo running to the Kamogawa gym as Wanpo followed him. He then walked home with Ippo when he left the gym. Wanpo followed Ippo at some points as he trained to fight against Shimabukuro Iwao and was seen at the house when Ippo came back after a training session. Wanpo was next to Ippo while Umezawa Masahiko was thinking about how Ippo's expression looked like a challenger's. After Ippo's match against Shimabukuro, Wanpo clung to Makunouchi Hiroko as Hiroko and Umezawa wondered who Ippo likes between Kumi, Itagaki Nanako, and Iimura Mari.

After growing into adulthood, he has come to greatly resemble his father, a large white dog. Wanpo also wears a blue dog collar. Wanpo's dog breed is a hybrid of Akita dog and Alaskan Malamute.

He tends to be excitable toward certain people when he sees them. He is friendly toward most people unless hostile toward Ippo, growling at anyone who upsets him. Wanpo likes running and following Ippo as he does roadwork. According to Ippo, Wanpo likes snow.[1] 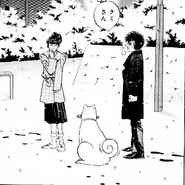 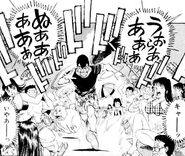 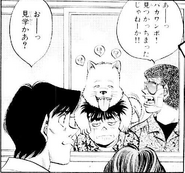 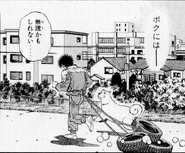 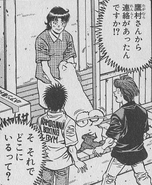 Retrieved from "https://ippo.fandom.com/wiki/Wanpo?oldid=72541"
Community content is available under CC-BY-SA unless otherwise noted.