Alexander Volg Zangief
White Fang (ホワイト・ファング, Howaito Fangu) is Alexander Volg Zangief's signature technique: a lightning fast combination consisting of an uppercut followed by an overhand. The two moves are so fluidly executed they can easily seem simultaneous to the untrained eye.

The technique is used strictly in close range situations. Volg fires an uppercut to the opponent's head with the lead arm, then drives in a punch with the dominant arm from above. It must be stressed that there is virtually no delay between the two punches. The combination is portrayed as a wolf's fangs as they sink into their victim.

Later on, Volg learns to combine the White Fang finishing punch with other uppercuts, such as the Tsubame Gaeshi to add even more reliability to landing the finishing blow.

Fast and barely noticeable by onlookers, the White Fang's strength and devastation on the skull can trigger immense brain damage capable of ending a boxer's career. As mentioned by Kamogawa Genji, it is a technique that cannot be blocked easily due to its quick combination of punches from above and below. Should a person block the first uppercut, the overhand would still land unhindered. Volg once stated that even he feared the technique.

Despite being a natural out-boxer, Volg can use the White Fang as a finishing blow while being an in-fighter.

It is unknown how it was achieved, but Ippo was the only boxer shown to be able to dodge both the White Fang's punches by countering it with a Gazelle Punch. However, one must also take into account Volg's depleting stamina and strength during this stage of his fight against Ippo, which may have had an effect on Volg's timing and precision in executing the White Fang. 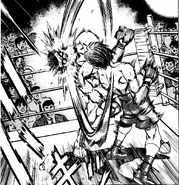 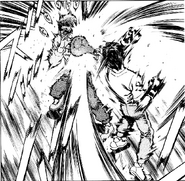