Mitsuo Yoshida (吉田満男, Yoshida Mitsuo) is a non-recurring character in Hajime no Ippo.

He is a former featherweight boxer who participated in the East Japan Rookie King Tournament and fought Kobashi Kenta.

Yoshida had an impressive record as an amateur, having participated in the Interhigh Championship and made it to the finals two years in a row. However, he was defeated by Hayami Ryūichi.

Partaking in the East Japan Rookie King Tournament, he was regarded as one of the four seeds of the tournament. He faced against Kobashi Kenta in the first round.

In the match, Yoshida had trouble overcoming Kobashi's strategy which included light jabs and clinching to throw him off his rhythm. The match continued this way until the end, with Kobashi having complete control of the match and Yoshida unable to do a thing, ultimately losing by decision.

Yoshida is a man with a well-built tanned body. He has black hair with several bangs over his forehead. Yoshida has forehead wrinkles and visible cheekbones.

Yoshida has shown irritation when he was unable to hit Kobashi in the East Japan Rookie King Tournament and grief when he lost by decision.

Making it to the Inter-High Tournaments Finals two times in a row and being one of the four seeds in the 1991 East Japan Rookie King Tournament, he can be regarded as a skilled boxer. However, he has trouble with boxers who try to win by decision with jabs and clinches such as Kobashi Kenta. 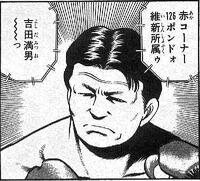 Yoshida Mitsuo in the manga. 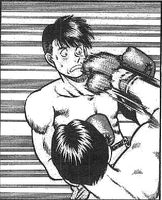 Kobashi vs Mitsuo with Mitsuo attacking. 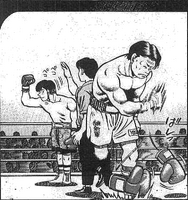 Kobashi declared the winner.
Add a photo to this gallery

Retrieved from "https://ippo.fandom.com/wiki/Yoshida_Mitsuo?oldid=70586"
Community content is available under CC-BY-SA unless otherwise noted.